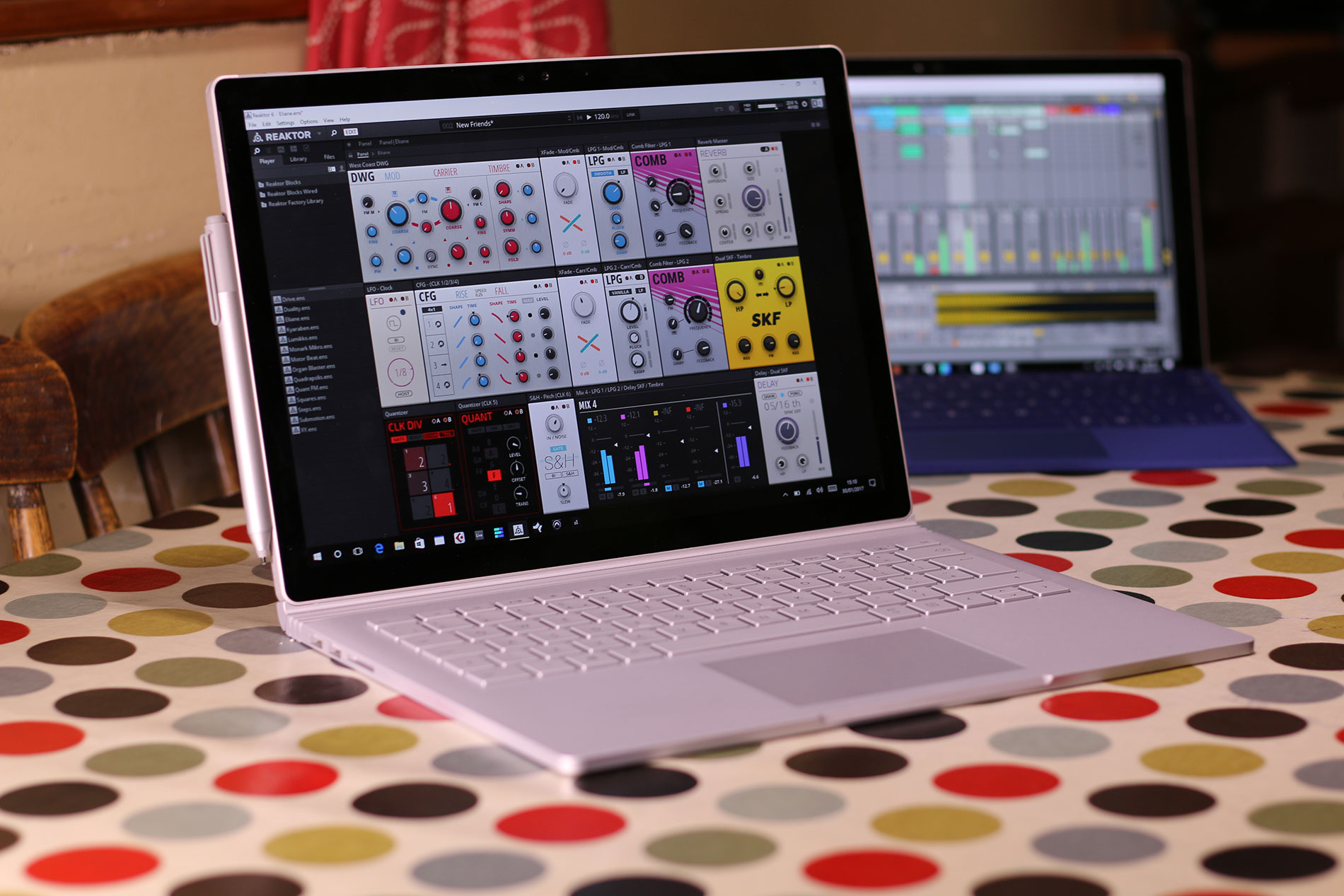 Is the Surface Book suitable for music production and live performance? After two months of exhaustive testing I can finally give my view on the Microsoft Surface Book as a platform for music and audio production. Spoiler – the results are good!

I’ve testing all sorts of music software such as Cubase, Pro Tools, Bitwig, Studio One, Ableton Live and Sonar. I’ve run software instruments such as Arturia V Collection, Native Instruments Reaktor and Biotek. I’ve installed audio interfaces and controllers such as the Avid FastTrack Duo, Keith McMillen K-Mix, Novation Bass Station II and Circuit. I’ve run it with Ableton Link, I’ve done multi-track audio and I’ve created some terrible electronic music. And it’s all been good. It’s all behaved as it should. I’ve made a lot of comparisons to the Surface Pro 4 and I’m happy to say that the SP4 is working brilliantly as well. All the Windows updates and firmware updates since the testing I did last year have improved the performance for music making tremendously. بطولات الليفر

So check out the video below for all the details. And if you want to see the detail of the tests I ran then you’ll find nearly 6 hours of content on my YouTube channel. The script I based the video on continues below.

I’ve had the surface book on loan from Microsoft for 2 months. So, what have I done with it?

And it’s been fine – in fact, its been fabulous.

If you want all the details of the performance tests – and reasonable examples of the sort of performance you can expect then you’ll find all the videos on this channel or on SurfaceProAudio.com

I had no problems running any music software or hardware. The Surface Book has a U series processor – these are designed for long battery life, low power but nippy performance for mobile devices – these are the least ideal processors for music production. Music production wants high power, high performance, always on desktop CPU power. However,  the Surface Book offers other advantages in the form factor, in live performance and with interactivity that make it interesting to me and other artists. So – what I am saying is that you are not going to get desktop performance. However, what you do get is pretty impressive in my view.

So, some examples for you. I could run Reaktor 6.1 all day, very easily, with Ableton Link – fabulous. With Ableton Live I was able to run a project with 8 Arturia virtual instruments and 8 instances of Reaktor Blocks with some plug-ins and samples running – no problem. In Pro Tools I had 40 virtual instruments going, including 8 Reaktor Blocks. I recorded 96 tracks of audio with 279 plug-ins before Pro Tools glitched. This is good stuff for the Surface Book i7. My Surface Pro 4 also performed brilliantly with about a 15-20% drop in comparison.

So I can safely say that the problems I hit early on with the SP4 are no longer present. Now both the SB and the SP4 are totally capable of running audio software and hardware – at least in this experience here. There’s always the potential for struggle in any system but hopefully the tweaking guide and other information provided here will help you with that. لعبة دومينو اون لاين للكمبيوتر

So what do I think of the surface book as a device for music production? I can honestly say that I’ve never handled a more beautiful device. The feel of the keyboard and trackpad is awesome, the screen is breath-taking, the feel from the pen and the touch integration is fabulous.

It has the power and stability to run decent sized projects and gives you more ways of interacting in live performance than you get with a regular laptop or MacBook. Because the touch experience is vital. The whole pen and touch aspect is what, for me, makes the Surface range interesting. Let me try to make this clear. I don’t want all touch – that can be clumsy and restricting in some areas – I want everything. I want to be able to use a fabulous keyboard and trackpad, but I also want to use touch to compliment it – or the other way around. I hear people say that such and such a piece of software is no good for touch so what’s the point – well then use the keyboard and mouse – you are not restricted. We can all use keyboards and mice with our computers – but I’ve increasingly found that trying to direct all my ideas, all my creativity through the single point of a mouse is just bonkers – it ties you up in knots. I don’t have to mouse around trying put a pointer on a fader – I can reach out and move it. With Surface – I can still single point it all if I wish – but I can also approach it differently, get my fingers in there, get the pen in there – you sit differently, your posture is different, your focus changes – and those things, in a creative space, are awesome!

It’s not perfect – how could it be? There were a couple of difficulties. First of all the USB sockets in the super slim chassis made it difficult to plug in dongles. My Cubase dongle and iLok were not looking very safe and in danger of getting bent. Obviously using a hub sorts that out but it’s a bit annoying. The screen detaching, although very cool, was more of an annoyance for me. Because it didn’t take USB or power with it then as a music making tablet it wasn’t really going to cut it. You’d have to shut your audio software down when doing it because otherwise it would get into a argument over the USB audio interface suddenly disappearing. So for me, it would be better if you could spin it around like with some other hybrids.

And then you have the screen wobble. It’s probably the biggest issue for me. When using the sb as a laptop it’s awesome – when folded down flat and getting stuck in with a pen it’s awesome. Where it doesn’t work so well is in hybrid mode. I am used to the sp4 where I use keys, trackpad, touch and pen all at once – whatever works. Reach out and touch the screen and it wobbles – it just does. You can minimise it with your hand and it’s no big thing with occasional prodding, but if you are used to touch – as I am – and you’re getting stuck in then it starts to become a problem.

This is the point at which you go into console mode – and that’s great, but you’ve now lost the keyboard entirely. That doesn’t happen on the Surface Pro 4. And this highlights the difference between the two devices. The Surface Pro 4 was designed as a touch device, as a tablet with laptop performance. The Surface Book was designed as a laptop with touch. So, in fact, the touch experience works better on the Surface Pro 4 – in this form factor – than it does on the Surface Book. An example is that some things just don’t like touch. The save/discard button on the Roland software synths will not go away with a finger or a pen. With the SP4 I can clip on the keyboard and deal with it – even in a live situation. With the Surface Book I cannot – and actually I should probably carry at least a wireless mouse with me just in case – I can’t, in the middle of a gig take the screen off and reattach in order to use the keyboard for a second.

So, on reflection, for what I use it for – music production and live performance – the Surface Pro 4 is still the better option. It’s better balanced, more rigid and resists my touch. In a live situation I need the screen there, angled up for touch and interaction. The SB can’t do that. I said right back when it was first announced that using touch on a regular laptop wouldn’t be ideal – I’d push it over. And although the balance of the unit is good enough to resist falling over, the wobble is just as I expected it to be. The SP4 is simply a better design for a touch orientated device – in my opinion.

I don’t need to extra graphics power, or battery life – I don’t need the laptop form factor – the SP4 is more versatile in my environment, more touchable and convertible. However, the Surface Book is beautiful – I am going to miss that screen and the feel of the keyboard and trackpad – I will miss its solidity as well – it feels solid and expensive – I would never throw it around like I do my SP4 – not sure if that’s a pro or a con actually.
it’s a marvellous device if the laptop form factor works for you.

One final thought and a plea to Microsoft. Please, someone, come up with a toolbar for the pen. Just a bunch of windows shortcuts. Dell have done it with their Palette software on their new Canvas touch-screen. That’s all I want – so I can copy/paste with having to faff around with right-clicking the pen…. موقع مراهنات كرة القدم مجانًا And then perhaps do loads of other really cool stuff with it.

So yeah, the Surface Book gets my unreserved seal of approval and the Surface Pro 4 is also now ready to go for making tunes. Which one to choose depends on what you’re doing and what form factor you prefer.