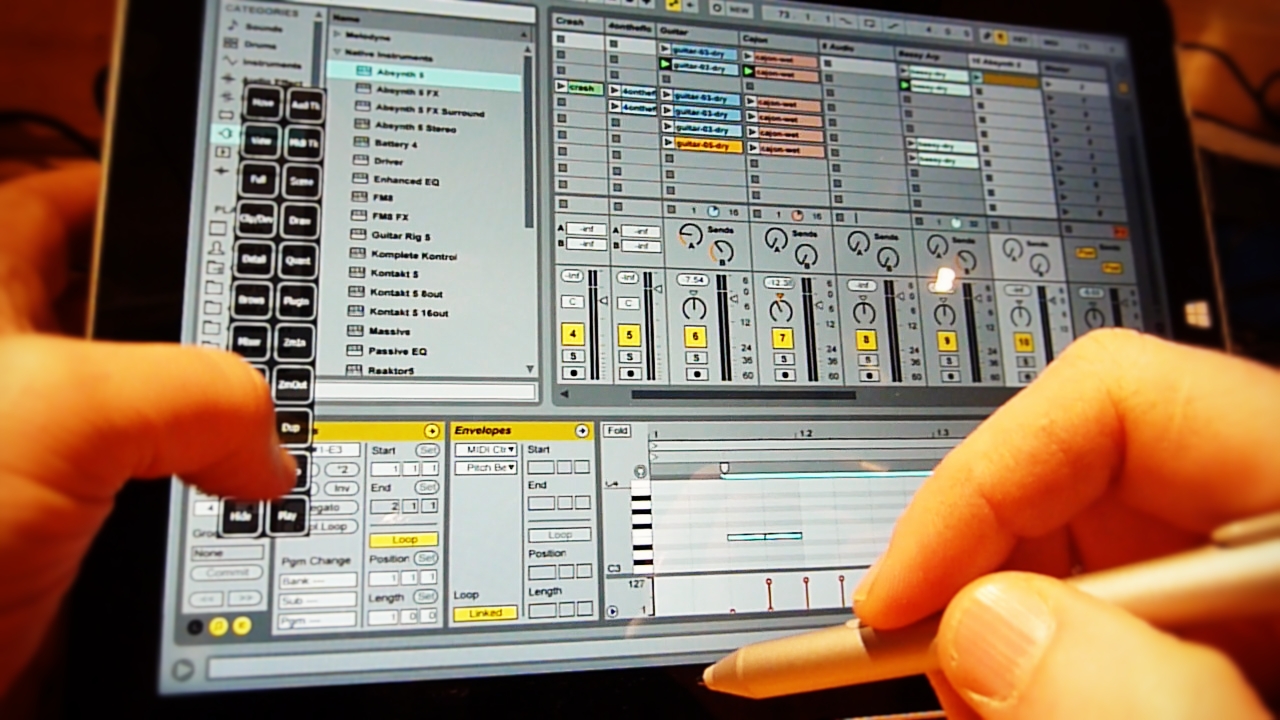 Welcome to Surface Sessions number 8 and what must be the most requested session to date – Ableton Live. It’s one of the most obvious pairings but it’s taken me a bit of time to get here because there were a few other key bits of software to sort out and I wanted to have found all the quirks and issues before I got to this point. In the last Surface Session there was a great deal about using Ableton Live in a live situation so if you’re particularly interested in that side of things then I’d recommend you check out those videos. But how well does Ableton Live run on the Surface Pro 3? What issues do we run into? What’s the performance like? Let’s have a look.

Here’s the full video version, text carries on below:

Installation and setup
Installation couldn’t be simpler really – it’s one big download and then run the installer file. It does this annoying thing where it appears to be installed and then spends an hour sorting out the included library and samples. There’s no dongle or anything for copy protection, just a quick connection to the Ableton servers and it’s authorised and ready to go. I’ve never had a problem running my one license on a couple of machines – in this case my main desktop and the Surface – I’m sure there’s a limit to this but my understanding is that Ableton have a sensible approach to copy protection and as long as you’re not taking the piss then they are happy for you to authorise it a couple of times on different machines.


Ableton Live is quite happy using the onboard sound, where as usual you have to actively switch between headphones and speakers. This is not without its issues. Ableton sees them both as “Speaker” outputs and can throw an error when you try to change between them – although weirdly after you close the error window the switch from speakers to headphones appears to be successful. It is pretty far from being smooth is any way shape or form and if you’re using the onboard sound then, as usual, I recommend using ASIO4All (.com) to accomplish this.

But as with most music software it’s always better to use an audio interface with ASIO drivers.

-AbsoluteMouseMode
Ableton Live does look very finger friendly but there’s an immediate problem if you try using your finger or a pen. You get this weird zipping around of controls from minimum to maximum, like you can’t quite get it to stop on an inbetween value. With the trackpad it’s completely fine so what gives? I have no idea why it works like this by default but Ableton have a fix for this. What you to do is create an options.txt file to tell Live not to be so silly. You put the file in the preferences folder which on Windows 8 is in “Users – your name – AppData – Roaming – Ableton – Live 9 – Preferences”. You’ll have to turn on viewing hidden files and file extensions. You then have to add the line “-AbsoluteMouseMode” and save it. Now it will work properly. Apparently doing this may affect some other controls when fine tuning using the CTRL key, but I don’t see any other way of making Live usable on the Surface Pro 3.

Layout and scaling
Live has no problems dealing with the scaled nature of the Surface’s desktop and for composition the layout and size of things is pretty great. You can get a lot on screen, access all of the programs bits and pieces without it feeling too small or crowded. However, when it comes to performing, those clip and scene play buttons are just too small to hit reliably with a finger. Two easy solutions spring to my mind – first of all Ableton could install a button or option that simple doubles the height of the clips, making the little play buttons easier to finger and also makes what’s playing easier to see. Another option would be a mode where to entire clip rectangle triggers the loop rather than the tiny play button – that would be genius. Ableton does have something else up its sleeve – it has its own ability to scale. Hidden away in the preferences under Look/Feel is a scaling slider that lets you blow up the interface to alarming levels. At about 150% you end up with the clips and scenes pretty much filling the screen at a size that’s easy to see and easy to touch. The only problem being that you cannot access the parts of the program you can’t see. There’s no scrollbar or way I can find of moving the interface around. It’s a little bit odd to be honest, but also potentially very effective if you don’t mind seeing only part of the screen. Let’s see if the Windows scaling can add anything to this.

Whopping the desktop scaling up to a full 200% has pretty much the same effect as scaling within Ableton but you get to see all of the screen. The text gets a bit crappy at this sort of scale but actually, the working screen in terms of size if you were wanting to trigger loops and scenes live is pretty good. It’s annoying that you have to log out and back in to change the scaling like this – not sure why it can’t be a bit more seamless but it does make you feel more confident that you’ll be able to hit those play buttons with your finger – still like the whole clip to be the trigger though!

Other touch gestures are completely ignored – there’s no pinch-zoom anywhere as far as I can tell.


The Pen Toolbar
Running Ableton on the Surface would not be complete without my trusty toolbar constructed in Toolbar Creator. Although I don’t tend to use many keyboard shortcuts in Ableton I was soon able to create something that as immediately helpful if you were using the Surface without the keyboard. See previous post about the pen toolbar for more information on all that or watch the video for more detail.

Hardware Controllers
Working with controllers is a bit of thing for Live and I would always use it with the Launchpad as it makes your whole world so much easier. It can be restrictive in its 8 x 8 form factor but as long as you know your projects and set it up to give you the best visual clues as possible then it’s an awesome way of performing with Live. With the scaling adjustments you could do away with the Launchpad but honestly there’s no harm in having everything. Which brings me nicely to the bit of trouble I had with the Launchpad and the Bass Station II that I was trying to run in Surface Sessions 07. It’s time to revisit that to see if I can’t get these two bits of hardware from Novation playing nicely.

Well that was easy while running on the onboard audio – no problem running them together through the powered hub and also no problem through the dock. I just added the Avid FastTrack back into the mix and when I selected it in Ableton I got my first ever genuine blue screen. After the reboot I tried again and this time it took it ok with everything working. So just be aware that hardware can let you down and sometimes you need to be patient and try things in different orders if you run into trouble – but it’s totally capable.

Performance
As ever this is a tricky thing in trying to find some kind of useful comparison. In the videos about my live performance preparation in Surface Sessions 07 you’ll see me run a few projects quite happily with multiple tracks and several Native Instrument plug-ins – check those out for more information. I did find a performance test on the Ableton forum for Live 9 which I’ll have a go of now.
Running the 8 track test with the FastTrack at 512 samples I get a CPU peak at 26%.

https://forum.ableton.com/viewtopic.php?f=1&t=191549
Looking through the thread there’s a MacBook Pro i5 running 30%, an iMac Core 2 Duo running 36%, a 2.9GHz i7 MacBook Pro running 25%. My i7 3770K desktop machine ran it at 13% – what does this mean? To me it means the test is pretty flawed. It’s really hard to do a comparison based on what a CPU meter is telling you because then tend to be rubbish and terribly inaccurate. Using some sort of positive failure test is much more telling. Duplicating the 8 test tracks I was able to get up to 52 tracks before I got crackling. From around 48 tracks I got an initial crackle which then immediately settled down for stable playback. Looking through the thread there’s an i7 2.2GHz Toshiba laptop doing about the same, a MacBook Pro i7 2.6GHz doing around 80. My desktop machine went over 100 without any trouble. So do you see what I mean about measuring performance being a tad problematic. It will also vary depending on the audio interface you’re using as some drivers are more efficient than others. Suffice to say that the Surface has performed well, with multiple tracks, a handful of large instruments and appears to compare well to other portable computers of similar specs. Does that help at all?

Final Thoughts
So Ableton Live and the Surface Pro 3 is a match made somewhere on its way to heaven. There’s a few key things that Ableton could do in order to make it a more joyful touching experience but with my handy toolbar the editing is a breeze with the pen and when you scale it up you have a totally workable performance tool. I wish one of these big players had the imagination to embrace touch technology on the desktop – it would be an awesome thing.

It’s time to start looking at software that does have touchableness built in, so coming up next is Sonar, FL Studio and Stagelight and lets see how at home they feel on the Surface Pro 3.