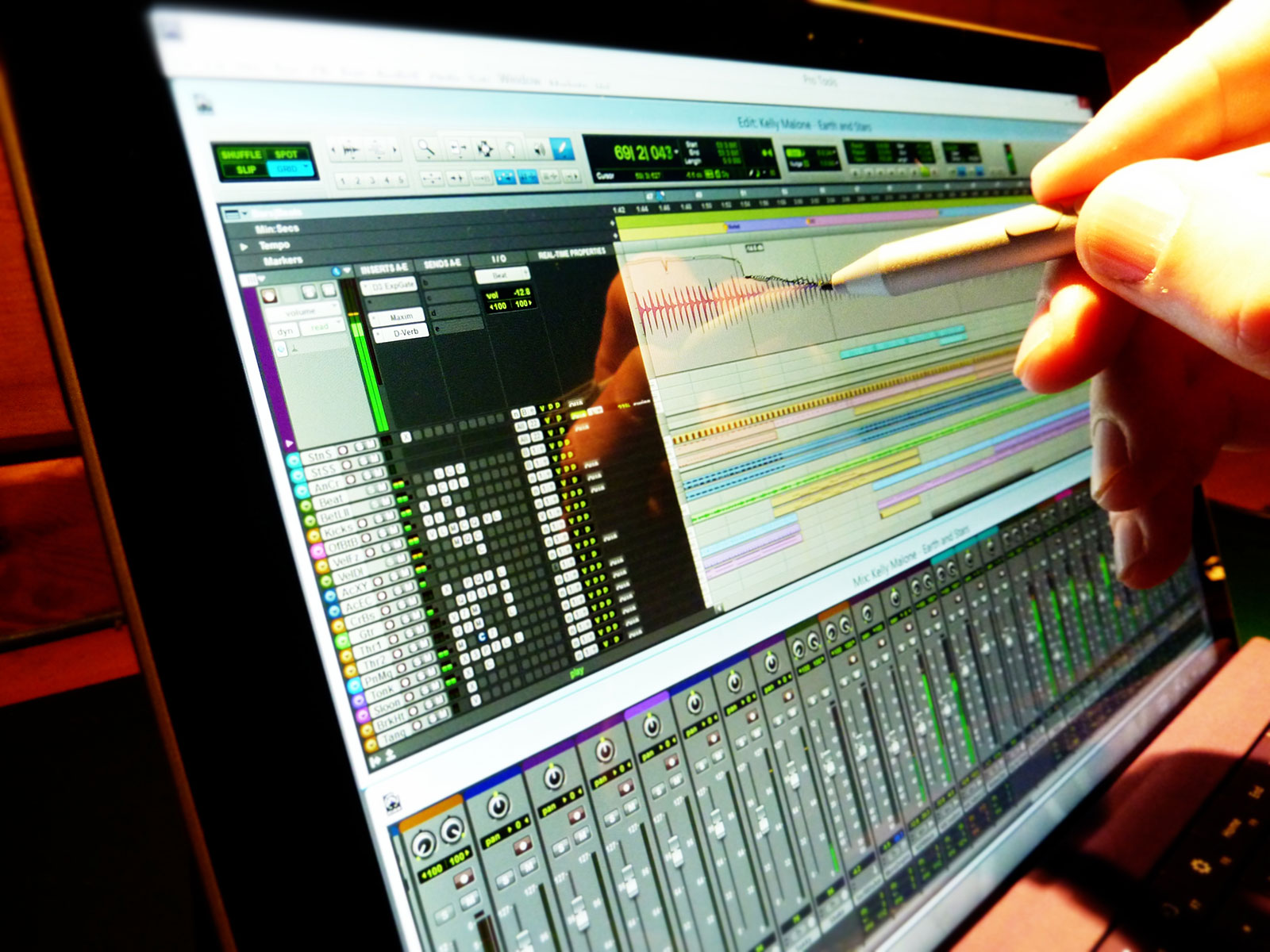 Right then, Pro Tools – this is one of the more fussy bits of music software. Let’s see how it flies with the Surface Pro 3. الفائز بكاس العرب 2024

Here’s the YouTube version, for the text please skip below.

First of all can we run it on just the Surface without having to plug anything else in? Well you’ll need an iLok which will take up the single USB port. Pro Tools can’t deal with regular Windows audio drivers – it needs an ASIO driver or it won’t get past the splash screen. Luckily there’s an awesome application called ASIO4ALL which wraps up regular WDM drivers into a nice ASIO driver which Pro Tools understands (www.asio4all.com). This enables us to use the Surface’s on-board audio, plug in some headphones and be completely mobile without having to plug-in a proper audio interface. Groovy.

When you open up the demo song the first thing you notice is how incredibly small everything is. Pro Tools appears to have got confused about the resolution and started up maximised but in a corner. A couple of clicks and it’s full screen again. At the default scaling you can get the whole project on screen along with 27 fully wide faders. Checking the display settings we find that by default the Surface is on the third of four desktop scaling settings so in the Surface world this is actually pretty scaled pretty big. Moving the slider to the smallest and you can fit forty faders across – that’s pretty extraordinary. It’s getting too small now for effective use of the fingers, but maybe not for the pen – maybe this is where the pen will come into its own, if you want to work at these sorts of resolutions.

The top toolbar is a little messed up though – the words seem to run into each other. There’s another setting in Display to reduce the text size of certain elements – if you change the title bar text to any different point size and hit Apply it all comes back into line – sadly this goes back to being messed up the next time you run Pro Tools so it’s probably best just to leave it.

Quality of playback through the on-board speakers? It’s all right, it’s a bit like a laptop, sounds ok. Here’s a bit of an oddity – if you plug in headphones you’ll find that you still get output from the speakers, it doesn’t seem to automatically switch when you plug-in. Windows appears to treat the speakers and headphone outputs as completely different entities, so in order to use the output socket we have to change the priority to the headphones. Pro Tools only sees what the ASIO4All wrapper has wrapped up and so has no knowledge of you plugging in the headphones. In the ASIO4All settings you can select both the speaker and headphone output or swap between the two. Whenever you change anything in the ASIO4All settings Pro Tools complains and has to restart, which is a little unfriendly. كم عمر كريم بنزيما There may be another way to do it in Pro tools, so perhaps you could have both outputs selected and then change them within Pro Tools but that somehow seems even more complicated.

If you then pull the cable out while Pro Tools is playing it will stop and throw up an error – but it recovers if you put the cable back. So it’s not exactly graceful but Pro Tools can work with the onboard sound but it’s just a bit of a fiddle.

A better alternative would be to use a proper USB audio interface, like the Avid Fast Track Duo that I’m using here. Of course we then run into our single USB port problem, but don’t worry, we’ll stick in a hub and see what happens. لعبه اون لاين Using a simple unpowered hub I can add the iLok and the Fast Track without any trouble at all. The Fast Track offers much better quality audio, reliability and has better inputs for recording things.

Pro Tools and Touch
Pro Tools on the whole responds really well to single touch control – it all works, you can grab anything, including the tools and move every parameter and move clips about, edit notes, automation – the whole lot. The only trouble is that at this resolution the knobs and controls are so small that my fat fingers have difficulty grabbing what I want to grab – maybe it’s time to try the pen out.
The pen is awesome, it’s a far better experience. You can see what’s going on, and get down to fine detail. It allows you to fly around the screen and perform any task you can do with a mouse but in a more hands on and connected way. Of course you can connect a mouse and use it the old fashioned way, but when you approach the screen with a pen you find yourself working in a different way. You’re closer to the action somehow, more involved in what’s going on – that sounds a bit silly but in comparison it’s weird how disconnected and distant we can be with a mouse in our hands. You can use the multi-tool function very easily and as the pen nib hovers over the screen the mouse pointer changes into the right tool as you move.
The keyboard tends to get in the way of intense pen action so it’s more comfortable discarding the type cover and angling the screen quite flat. The problem with that is that you then start missing keyboard shortcuts – the virtual keyboard fills half the screen and makes it quite difficult for these sorts of tasks. Perhaps a row of programmable macro buttons, like you find on the DTouch controller software would be what you need. At a basic level a couple of “always on top” hot keys for copy/cut/paste that you could tap with a finger would be fabulous as those sorts of actions are a bit of a faff with the pen. I wonder if this would be possible in Windows itself, it already has a couple of different virtual keyboards so how difficult would it be to provide a row of programmable buttons?

Performance Testing
We have a torture test we run called the “Dverb” test, or a version of that, which many Pro Tools users use and this has got 96 tracks of audio all with a stack of Dverb plugin’s loaded. The test is designed to check for errors rather than as a comparison test but it does give us some idea. When we run in on The Pro Tools PC (www.pro-tools-pc.com), which is based on a Core i7 4790K processor, a top-of-the-range desktop processor, it usually runs at around 70-75% system usage. On the Surface Pro 3 it runs at around 80-90% with smooth playback at 64 samples. On a Core i5 processor and this is an ultrabook processor that’s actually really impressive. You can’t do a lot else while this is going on, there’s no headroom for doing anything else as there is on the desktop computer, on here the system is running flat out, the fan has come on, the system is heating up and running at its full potential at this point. If you try to run the same test with the on-board audio it just can’t cope with it. You get a splurt of playback and it stops because the on-board sound is not designed to cope with this sort of intense audio playback whereas the audio interface most certainly is. I should also stress that I’ve not done any tweaking to the system at all – it’s running just as it was straight out of the box, so all the background processes are there and I did get a calendar notification while running the test that made it all fall over. You can turn off notifications for a couple of hours through a setting from the charms menu which is very handy if you are making music. So with that considered the performance is very good indeed.

I’ve seen some videos online where people with i7 versions of the Surface were encountering CPU throttling problems – this is where the CPU steps down in speed to prevent overheating resulting in lower performance. Running a Half Life benchmark the CPU seems to drop to half speed almost immediately and they’ve found that if they cool the Surface externally then the CPU speed stays at the maximum. I’m happy to say that I’ve not seen any behaviour like that. With the Dverb running up to 90% system usage the temperature has stuck around 70 degrees C and the CPU frequency has stayed at a constant 2.6GHz which is close to its maximum turbo speed. This is something that I’m going to keep a close eye on as it’s probably my worst fear, but so far those fears are unfounded, at least on this i5 machine. I’ll be doing a full report on performance testing in another video soon so keep an eye out for that.

Running on Battery
With the iLok and audio interface connected there was no problem in running off the battery – then I added a Bass Station II. All the lights came on and it appeared to be fine but once I tried to run Pro Tools I noticed that the iLok had turned off, so some amount of power shifting must have occurred. If you pull it out and plug it back in the Surface finds it again and you’re able to run Pro Tools. I then plugged in a USB drive and Windows got into a spin cycle off finding things and dropping things and Pro Tools complained about losing connection to its hardware. So, without power the Surface can certainly support an iLok, interface and MIDI keyboard but it’s right on the edge of what it can do. Bear in mind that the Bass Station is quite an intense and power hungry keyboard and a simpler dummy MIDI keyboard or controller would probably fare much better.
In another video we’ll look into how much you can plug in with a fully tweaked system and also look at the dock to see how that can be helpful.

Finally we’ll plug in another screen to see how that looks – and it looks great! Edit window on one screen, mix on the Surface tweaking with the pen – awesome.

Please watch the video for a bit more depth and examples of what I’m talking about.